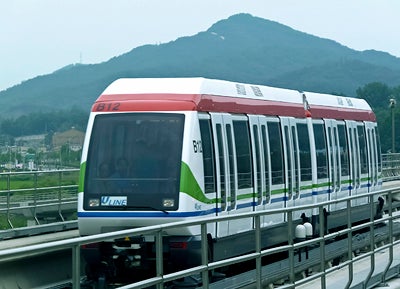 The 11.1km fully automatic light rail system, known as the U Line, links eastern Uijeongbu to the city centre with an interchange with Line 1 of the Seoul metro at Hoeryong.

U Line is served by 15 stations and was built on a turnkey basis in private-public partnership (PPP) at a cost of KRW547bn ($475m) by a consortium comprising six South Korean companies led by GS Engineering & Construction.

According to the South Korea's National Assembly Research Service (NARS), the rubber-wheeled LRT system will cost Uijeongbu city's taxpayers KRW10bn ($8.6m) a year over the next ten years.

"It is expected that ridership volumes in peak periods will rise to 6,400 an hour in each direction by 2040."

Siemens also delivered 15 two-unit rubber-tired VAL 208 vehicles, which will operate on the Uijeongbu line to transport 3,400 passengers an hour in each direction during peak periods.

Since the system does not require any drivers, it can operate 20 hours a day, with twin units running every 205 seconds at peak times.

Advantages of the VAL system include short headways under one minute, speeds of up to 80kmph, fast acceleration and short braking phases, while the rubber-tired VAL system is quieter compared to other rail systems in tight curve radii and it also allows fast starting and precision stops in stations.

It is expected that ridership volumes in peak periods will rise to 6,400 an hour in each direction by 2040.

Image: Val metro is a driverless system that can operate 20 hours a day, with twin units running every 205 seconds at peak times. Photo: courtesy of Siemens.