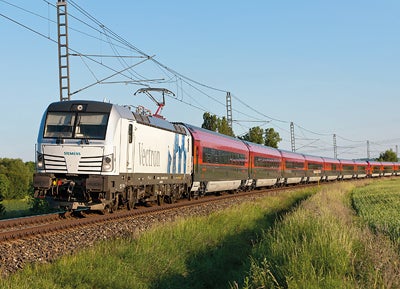 Siemens’ reconfigurable, multipurpose locomotive, Vectron, has received the EC Certificate from Eisenbahn-CERT (EBC) in Bonn, Germany, the notified body for interoperability of the Federal Railway Authority.

The Vectron locomotive family is Europe’s first locomotive platform to be certified for the specification set out in the Technical Specification for Interoperability (TSI) of rolling stock operating on the trans-European high-speed rail system (TSI HS RST).

With the certification, the Vectron locomotive can now run in all EU states, although additional requirements need to be met for the aspects of individual national operation not covered by the TSI certification.

Eisenbahn-CERT head Ulrich Wiescholek said that the agency took the platform concept particularly into account during the EC verification procedure.

"Eisenbahn-CERT head Ulrich Wiescholek said that the agency took the platform concept particularly into account during the EC verification procedure."

"Each locomotive variant within the Vectron family has the same basic configuration and, depending on the locomotive’s specific area of operation, is further equipped with individually selected configuration packages," Wiescholek said.

"By establishing verification modules, which span a range of parameters as large as possible and enable modular combinations, resources, time and costs associated with variant verification can be reduced. This means that a new variant can usually be certified at a low cost and within a very short space of time," Wiescholek added.

The entire locomotive fleet complies with TSI HS RST specification for class 2 vehicles that run at a maximum speeds from 190 km/h to 250 km/h on the trans-European high-speed rail system, as well as the TSI Safety in Railway Tunnels (SRT), which covers large parts of national fire protection requirements in Europe.

The locomotives also fulfil the TSI PRM (accessibility to persons with reduced mobility) and the noise level requirements covered in TSI HS RST, as well as in the specification for the trans-European conventional rail system TSI NOISE.

TSI was introduced to create binding regulations for the interoperability of the trans-European high-speed rail system, based on the complexity of the rail network and integrated aspects regarding basic requirements.

Siemens introduced its Vectron locomotive, designed for a wider range of traction tasks, in June 2010. The Vectron locomotive is intended to be deployed in national and cross-border passenger and freight traffic operation.

The locomotive can be added with country-specific automatic control systems, while the front-end has been designed as an internal deformation zone that can be easily disconnected from the rest of body, allowing easy replacement in the event of an accident.