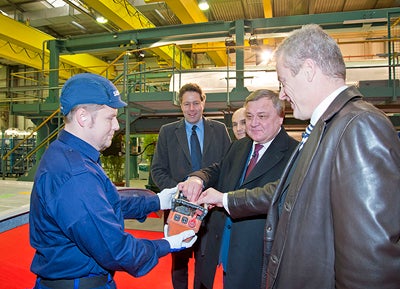 Siemens has started production of eight high-speed Velaro RUS trains ordered by Russian Railways (RZD) in December 2011 at its Krefeld plant in Germany.

The €600m order involves the delivery of the high-speed trains and maintenance of the trains for the next 30 years.

Delivery of the trains is scheduled to start in January 2014; the vehicles will be used between Moscow and St. Petersburg to meet increasing passenger demand on the high-speed line.

The new trains will also be designed to cope with extreme weather conditions, including temperatures ranging from -40°C to over 40°C.

Each Velaro RUS train will be 250m long with ten cars, capable of carrying up to 600 passengers and travelling at a maximum speed of 250km/h.

The Velaro RUS trains will use Siemens’ distributed traction technology, which calls for installation of all the drives and technical equipment under-floor over the entire length of the train, rather than adding power cars at each end.

"The €600m order involves the delivery of the high-speed trains and maintenance of the trains for the next 30 years."

The new technology will increase seating capacity by 20%, as well as providing more powerful acceleration and a better climbing ability on steep gradients.

Designed for double running even with Series 1 vehicles, the Velaro RUS cars will offer operational flexibility and allow capacity increases.

RZD has been operating Sapsan trains since the end of 2009, connecting Moscow to the cities of St Petersburg and Nizhny Novgorod.

Siemens signed a €2.5bn letter of intent with RZD in November 2012 to supply 675 locomotives to modernise the country’s rail network.