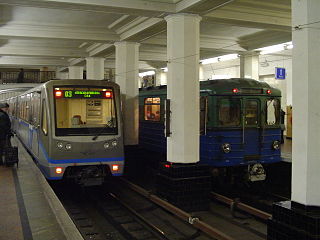 Siemens and Russian Machines (RM) have unveiled a full-size mock-up of their proposed new-generation train at the Fourth International Rail Salon of Engineering and Technologies EXPO 1520 near Moscow, as they plan to jointly bid to bring the new trains to the Moscow metro.

The Russian capital has announced its intention to buy 3,000 new metro cars by 2020 to replace its current life-expired vehicles and increase capacity as the metro network expands.

The two companies plan to cooperate for the Metro Moscow tender, which is scheduled to be issued by the end of 2013, and intend to establish a joint venture in the Moscow region.

The new Siemens-RM train, developed specifically for Metro Moscow, offers high travelling comfort, less noise and reduced vibration, as well as air conditioning and enhancements to passenger capacity and safety, according to RM.

RM board head Siegfried Wolf said that in cooperation with Siemens it plans to provide the city of Moscow with one of the most advanced rolling stocks in the world.

"Siemens is looking forward to teaming up for the Metro Moscow project with one of the most respected machine-building companies in Russia."

"Moreover, we intend to localise the production of new-generation rail cars in the Moscow region," Wolf said.

The new train reduces energy consumption and maintenance costs when compared to the vehicles that are currently in operation in Moscow, RM said in a statement.

Siemens Rail Systems CEO Jochen Eickholt said that Siemens is looking forward to teaming up for the Metro Moscow project with one of the most respected machine-building companies in Russia.

"We are contributing extensive know-how in the field of modern rail vehicles, already proven in Russia with the Sapsan, Lastochka and sleeping car projects for RZD, to make this cooperation successful," Eickholt said.