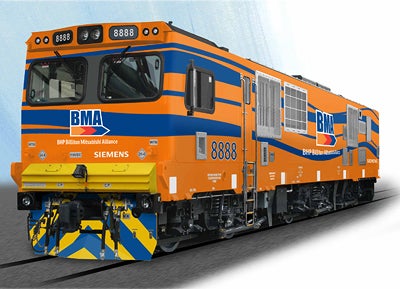 BMA will use the new locomotives to carry coal between the Caval Ridge and Daunia mines, as well as the Hay Point Coal Terminal in Queensland, Australia.

The new locomotives, which have been designed for heavy-haul freight services, will help BMA to transport around 15 million tonnes of coal every year from pit to port.

Siemens’ Munich plant will be responsible for manufacturing and testing the new locomotives, which will expand the fleet of E40AC trains operating on the Australian coal rail network to 100.

Each coal train is made up of three E40AC locomotives and 124 cars, and will be capable of carrying a payload of about 11,000t.

The E40AC, claimed to be the most powerful narrow-gauge electric locomotive in the world, has a maximum power rating of 4,000kW as well as continuous tractive effort of 450kN up to 32 km/h.

BMA will use the new locomotives to carry coal between the Caval Ridge and Daunia mines, as well as the Hay Point Coal Terminal in Queensland, Australia."

The E40AC locomotive is fitted with an AAR-type brake system, hardwired and wireless remote control systems, as well as an electronically controlled pneumatic brake system, while its electrical equipment was taken from the renovated Class 3700 locomotive.

According to Siemens, the electric brake system equipped on the E40AC can feedback train brake power into the catenary system, as well as allowing significant annual energy savings that result in lower CO2 emissions.

The body of the E40AC has been built to absorb tensile and compression forces of up to 4 MN, and is also fitted with an AAR F-type coupler and an anti-climber that offers improved cab protection for crew safety.

In March 2006, Siemens won a contract from Queensland Rail to supply 20 new E40AC locomotives, while another order for a further 25 locomotives followed in August 2007.

In July 2012, the company won a contract from BMA to supply 13 narrow gauge 25kV heavy haul electric locomotives to assist in commencing rail operations in Queensland.

Caption: Siemens E40AC type locomotives will help BMA to transport around 15 million tonnes of coal per year between the Caval Ridge and Daunia mines and the Hay Point Coal Terminal in Australia. Image: courtesy of Siemens.