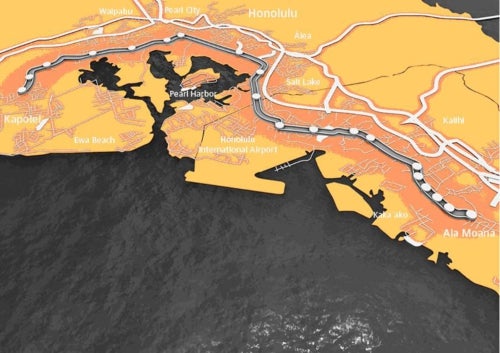 Siemens has won an order from Ansaldo Honolulu Joint Venture (JV) to electrify the track for the new Honolulu rail transit system in Hawaii, US.

Under the deal, Siemens will provide 14 traction power DC rectifier substations at 750 volts, a pair of tie breaker gap substations, as well as emergency stop equipment at the metro depot and all stops along the 32km line.

The rail transit system, which is scheduled to be finished in 2019, will have 21 stations connecting from East Kapolei to Ala Moana Center, passing through Pearl Harbour and Honolulu Airport.

According to figures from the Honolulu Authority for Rapid Transportation (HART), if the rail is not put into operation by 2030, the number of car trips per day is expected to increase by 40,000 on Honolulu’s highways and streets.

The rail project is expected to take 30,000 vehicles off the road per day and decrease delays due to congestion by around 18%.

"The rail project is expected to take 30,000 vehicles off the road per day and decrease delays due to congestion by around 18%."

The Honolulu rail system will be elevated and separated from ground transportation, enabling faster, safer and more reliable performance when compared to the alternatives built at ground level, but less expensive than an underground system, according to Siemens.

In 2011, HART awarded a $1.3bn contract to the Ansaldo Honolulu JV to supply the technology and rolling stock for the Honolulu driverless metro.

In March 2011, the Ansaldo Honolulu JV secured a $1.4bn core systems contract for the rail system, including $574m for the design, construction and delivery of 80 train vehicles and train control systems, plus $830m to operate and maintain it for 14 years.