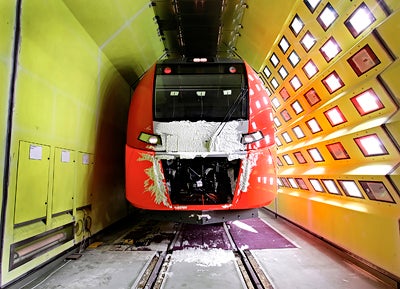 Siemens has received an approval from the Register of Certification on the Federal Railway Transport (RS FzhT) for its Desiro RUS regional multiple-unit train.

In June 2012, Siemens started certification test runs on five trains that continued until November, and the approval was made possible by the parallel execution of the certification process and the acceptance testing by the Russian Railways (RZD).

Testing the parameters of the train, as a whole, including derailment protection, electromagnetic compatibility and braking behaviour formed part of the second stage of certification.

Tests were carried out at the Rail Tec Arsenal (RTA) climatic wind tunnel in Vienna, Austria, with artificial wind, ice, rain and snow in order to check the functionality of the coupler, the doors or the windshield wipers.

The trains offer improved comfort for passengers and can operate at a top speed of 160kmph, as well as consume 30% less energy.

The vehicle is a development of the Desiro ML that will resist temperatures as low as -40°C and feature car bodies and bogies built for 1,520mm broad gauge track.

In December 2009, Russian Railways had placed a €410m order for 38 Desiro RUS regional multiple-unit trains for use during the 2014 Winter Olympic Games in Sochi.

The contract also included an option for another 16 trains, which could increase the order value to up to €580m.

Since April 2011, the company has been manufacturing the trains at its Krefeld plant in Germany, while the first Desiro RUS was delivered in March 2012.

In September 2010, RZD placed a €170m order for an additional 16 units to be built with an increasing amount of local content in Russia.