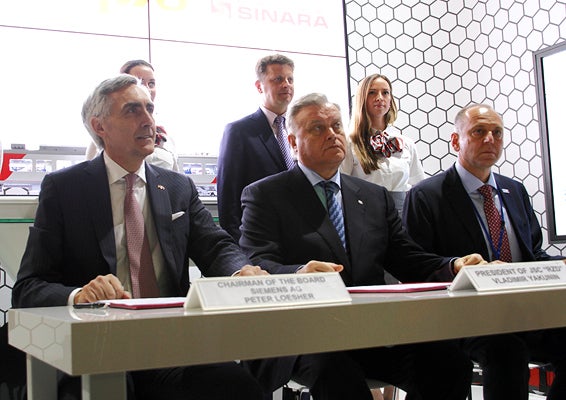 Russian Railways (RZD) has signed a memorandum of understanding (MoU) with Ural Locomotives, a joint venture between Siemens and Sinara, for the supply of 350 four-axle electric locomotives.

The locomotives will be developed and built by Ural Locomotives at its Yekaterinburg plant in Russia. Following full delivery by 2020, the single-section AC and DC electric trains will be used for feeder services.

Ural Locomotives will also be responsible for the full maintenance and upkeep of the locomotives under a separate contract due to be signed in 2014.

Russian Transport Minister Maxim Sokolov said: "The agreement not only solves the tasks involved in technologically renovating industrial production in the country, but also, in particular, improving the performance of rolling stock, and hence reducing the cost to manufacturing companies of transporting their products."

"Following full delivery by 2020, the single-section AC and DC electric trains will be used for feeder services."

The three companies have also agreed to localise 80% of production of the Desiro RUS trains in Russia by the end of 2017. The companies have compiled a list of basic units and components for the train that should be manufactured in the country.

The deal follows a €2.5bn letter of intent signed in November 2012 between RZD and Ural Locomotives for 675 type 2ES10 locomotives.

The 2ES10 locomotives will also be developed and manufactured by Ural Locomotives at its Yekaterinburg plant.

Image: Siemens president and CEO Peter Löscher, RZD president Vladimir Yakunin and Sinara Group president Dmitry Pumpyansky at the signing of the MOU for the supply of 350 electric locomotives. Photo: courtesy of Siemens.