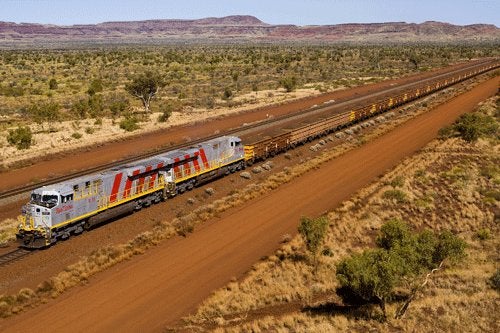 Rio Tinto has unveiled a A$518m ($558m) investment plan for a project to run an automated long-distance heavy-haul rail network in Western Australia.

Rio Tinto’s share for the automated train programme, touted to be the world’s first, will be A$478m ($515m).

The UK’s global mining company said the first driverless train will be rolled out across its 1,500km rail network in 2014, as part of its AutoHaul automated train programme due for completion a year later.

Rio Tinto chief executive Australia and iron ore Sam Walsh said the organisation is leading the way in large-scale use of automation, with plans to deploy 150 driverless trucks and plans for AutoHaul.

"Expanding Pilbara iron ore production is a high-return and low-risk investment for Rio Tinto that will enhance shareholder value. Automation will help us meet our expansion targets in a safe, more efficient and cost-effective way," Walsh added.

Rio Tinto currently runs 41 trains from mines to ports, comprising of 148 locomotives and 9,400 iron ore cars. The company noted that automating train operations will allow it to expand Pilbara production capacity without the need to make a substantial investment in additional trains.

The company says the removal of driver changeover will result in flexible train schedules, helping in creating extra capacity in the rail network.

It said the introduction of driverless trains will enable more efficient fuel use, resulting in lower energy costs and a reduction of carbon dioxide emissions for each ton of iron ore produced.

AutoHaul train project is being undertaken as part of Rio Tinto’s Mine of the Future initiative that already has driverless trucks and autonomous drills.

The programme, launched in 2008, introduces next-generation technologies for mining operations that aim to reduce costs, increase efficiency and improve health, safety and environmental performance. AutoHaul and the overall expansion of rail operations are subject to a number of State Government and other approvals.

Image: The company has a 1,500km rail network and currently runs 41 trains from mines to ports. Photo: Rio Tinto.