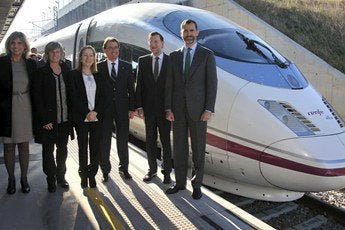 Spanish rail operator Renfe has begun commercial operations on the 131km high-speed passenger rail line opened on 7 January 2013 between Barcelona and the city of Figueres, which borders France.

Nine trains have been scheduled to be operated on the line in each direction, eight of which travel to and from Madrid.

The project involved the construction of 30 tunnels totalling 34.3km, including a 5.8km tunnel under the centre of Barcelona between Sants station and La Sagrera, as well as 60 viaducts with a total length of 12.6km.

Trains will be able to travel at top speeds of 300km/h and will be operated by Renfe along with French national rail operator SNCF. The trains sare set to be equipped with ECTS and electrified at 25kV ac.

Around 76km of the Barcelona – Figueres high-speed line was opened in December 2010, for freight services running between Mollet and Girona.

"Nine trains have been scheduled to be operated on the line in each direction, eight of which travel to and from Madrid."

The new €3.7bn stretch of line, which completes the 804km high-speed line between Madrid and the French border, is part of a project to connect the French and Spanish high-speed routes across the border.

According to the Spanish Government, the link-up, which is expected to be completed in April 2013, will carry passengers between Barcelona and major French cities directly, reducing journey times.

Travel time from Paris to Barcelona on the new stretch will be six and a half hours, while journeys from Paris to Madrid will take around 10 hours.

Image: Catalonia president Artur Mas, Prince of Asturias Philip and Spanish Prime Minister Mariano Rajoy during the opening of the high-speed section of the Barcelona-Girona-Figueres line. Photo: courtesy of Generalitat of Catalonia.