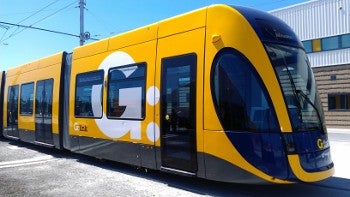 The Gold Coast light rail transit system (GCLRT) in the Australian state of Queensland has moved a step forward with the $1.2bn tram network branded G:Link.

At a ceremony to mark the launch of the new branding for the project’s operator franchisee, GoldLinQ, Bombardier presented its first Flexity 2 Light Rail Vehicle (LRV) for the project.

Based on Bombardier’s Flexity family of LRVs, the Gold Coast trams have been styled by the company’s industrial design team in Brisbane to include a wave motif on the cab front.

Bombardier said that the new LRVs are the world’s first trams to be designed and built to carry surf boards on racks and feature the most powerful air-conditioning system in their class.

Queensland Transport and Main Roads Minister Scott Emerson said that the 43m-long trams will now be tested on the system before passenger services begin in mid-2014.

"The trams will have the ability to deliver more than 300 people, every seven-and-a-half minutes, to Southport, Surfers Paradise and Broadbeach," Emerson said.

"The new LRVs are the world’s first trams to be designed and built to carry surf boards on racks."

The first stage of the 13km project will serve the new Gold Coast University Hospital, which is due to open later this year, and Griffith University.

The rail line will be serviced by a fleet of 14 seven-carriage Flexity 2 trams, to be delivered by Bombardier Transportation over the next four months.

Australasian Railway Association (ARA) CEO Bryan Nye said that the project is a viable, sustainable and smart solution for the Gold Coast, with tourism and urbanisation starting to cause greater stress on the city’s existing infrastructure.

"The G:Link will provide this tourism hot-spot with a world-class public transport network, able to transport over 300 people stopping at 16 stations every 7.5 minutes," Nye said.