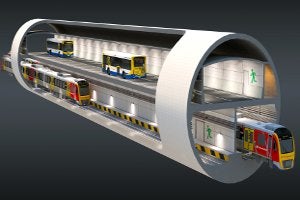 The Queensland Government in Australia has announced the $5bn Underground Bus and Train (UBAT) project in Brisbane.

In a reputed world-first, the project will have a 5.4km-long, 15m-wide double-decked tunnel underneath the Brisbane River to carry both rail and road traffic; two train lines will run in the lower section and two busway lanes in the upper.

The tunnel will be built 35-45m underground and will be dug with the largest bore ever used in the country.

"This will be a major economic boost, creating hundreds of jobs and new pathways for business."

"The project we are announcing today delivers the public transport services needed for the next 50 years."

The tunnel design incorporates several cost-efficient ramps as the new trains commissioned by the government are capable of travelling on steeper slopes.

The north-south tunnel will connect Dutton Park in the south to Victoria Park in the north and have three underground stations at Woolloongabba, George Street and Roma Street. The stations are designed to have two rail platforms and two bus platforms.

The UBAT project is expected to begin in 2015 and end in 2021; a public competition is planned to be held early in 2014 to name the project.

Treasurer Tim Nicholls said: "This will be a major economic boost, creating hundreds of jobs and new pathways for business to grow and develop in Brisbane."

Image: The Brisbane UBAT project will have two train lines in the lower section and two busway lanes in the upper. Photo: courtesy of State of Queensland (Department of the Premier and Cabinet).