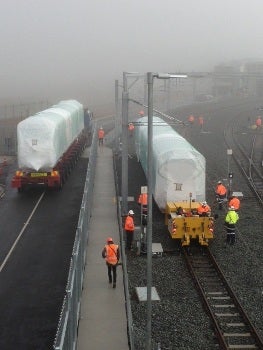 Auckland in New Zealand has unveiled the first of 57 new electric trains that will replace the city’s ageing diesel fleet, a development that will offer a new public transport option to citizens.

The train, which arrived at the Ports of Auckland on 24 August, has been under further testing, commissioning and driver training in the Wiri Depot.

Transport Minister Gerry Brownlee said: "The unveiling of the first electric train is an important milestone in the government’s $1.6 billion programme to provide a step change in the performance and capacity of Auckland’s rail network."

Designed particularly to address the needs of the people in the city and to meet the latest in comfort, safety and technology, each of the new trains will accommodate 375 passengers, up 40% compared to the capacity of the city’s current diesel fleet.

The new air-conditioned trains will feature open gangways between cars for easy movement from one end to the other, along with enough space under the seats for luggage, strollers and guide dogs.

Each train will have wider doors for easier passenger boarding, as well as automatic ramps for wheel chair users.

Auckland Transport chairman Lester Levy said: "Along with so many Aucklanders, we are very much looking forward to the first trains going into service in the second quarter of next year, finally bringing the latest and most modern public train transportation to this wonderful city."

The trains will be slowly introduced into passenger service on a line by line basis until the 57-electric fleet is in service by late 2015.

Image: The new electric train arrived at the Ports of Auckland on 24 August. Photo: courtesy of Auckland Transport.