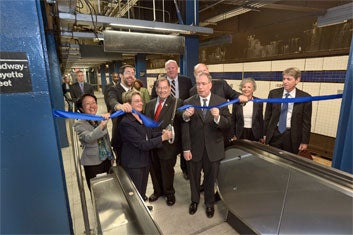 The opening of the new Bleecker Street / Broadway-Lafayette station is expected to provide better access to subway users.

Under the $127m project, five elevators have been installed at Bleecker Street Station to make it fully accessible for disabled customers.

The fund was provided by the Federal Transit Administration (FTA) for the project, which included renovation works such as improved lighting, new platforms and control area, upgraded communication systems, as well as a new artwork integrated into the design of the new transfer point.

According to the MTA, the new corridor will benefit around 30,000 riders every day who commute in underground trains.

MTA chairman and CEO Joseph Lhota said: "In fact, through our current capital programme, we will invest more than $2.5 billion dollars in New York City, just for station work creating thousands of jobs with an overall economic impact in the tens of billions."

The new subway connection marks the fourth free, in-system transfer New York City Transit has been able to open for customers in the last four years.

"The opening of the new Bleecker Street / Broadway-Lafayette station is expected to provide better access to subway users."

Work under the project started in July 2008 and included engineering and construction with many elements such as utility relocation, platform extensions, and the installation of five elevators, as well as maintaining subway service.

Bleecker Street station was built in 1904 as part of the city’s first subway line and in 1940 the MTA had merged three separate subway systems into a single system.