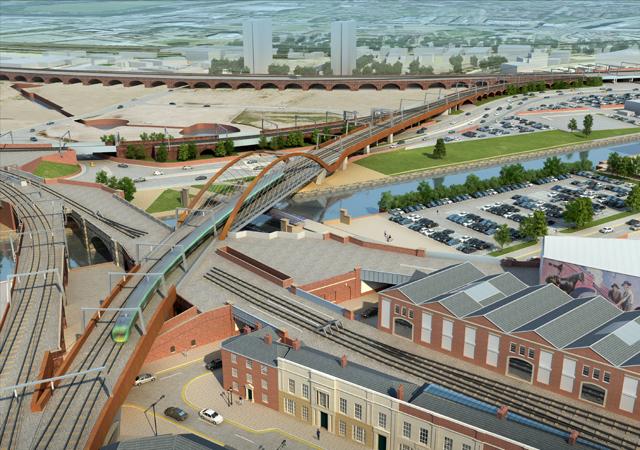 Network Rail will start a public consultation next week on its plans to build a new viaduct linking Victoria, Oxford Road and Piccadilly rail stations in Manchester, UK.

The new section of track, known as the Ordsall Chord, will allow more trains through the region, and is expected to boost the regional economy by £4.2bn and create up to 30,000 jobs.

The track will be located to the north west of Castlefield Junction, crossing the River Irwell between Salford and Manchester.

The £85m Ordsall Chord, which will free up space on the network for faster and more frequent services, is part of Network Rail’s £560m plan to develop railways throughout the north of England.

Upon completion, services on the new section will include two new fast trains per hour between Manchester Victoria and Liverpool; six fast trains an hour between Leeds and Manchester; a new direct train across Manchester to the airport as well as faster journey times to Hull, Newcastle and the North East.

"The track will be located to the north west of Castlefield Junction, crossing the River Irwell between Salford and Manchester."

Network Rail route managing director Jo Kaye said that the Ordsall Chord track is the first part of the company’s wider plan to bring a better railway to the north.

"Our proposals will help the economy, making it easier for people to travel between the towns and cities of the North as a result of greatly improved connections across the region," Kaye said.

"We are keen to talk to people about the progress we have made on the scheme and are looking forward to hearing their views."

Network Rail expects that the proposal will be approved by the Planning Inspectorate in the autumn of 2014 and that services will begin in 2017.