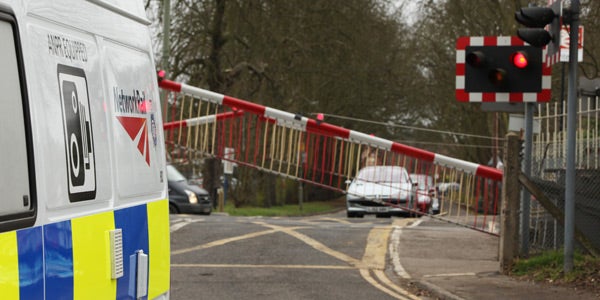 As part of the introduction, a BTP-operated marked police van equipped with nine number plate recognition cameras has been stationed at Shiplake level crossing in Oxfordshire to prevent people from breaking the law.

Network Rail said flashing lights at the Shiplake level crossing had frequently been ignored by motorists and pedestrians, risking their lives.

Funded by Network Rail, the police vans will have access to all the systems required to process prosecutions instantly.

The new measures are intended to prevent motorists from jumping lights and swerving around barriers at crossings.

Network Rail route managing director Patrick Hallgate said that most people who jump the lights and ignore warning signs at level crossings know that they are breaking the law, but that doesn’t seem to stop them.

"The new camera van is a strong deterrent for anyone thinking about breaking the law at a level crossing," Hallgate said. "With the latest technology on board, it means the police can prosecute the small minority who insist on flouting the rules, even in the presence of a marked police van."

"The police vans will have access to all the systems required to process prosecutions instantly."

BTP Reading office sergeant Dominique Ioannou said that the railway safety camera technology currently in use across the country provides an extra tool to prevent criminal behaviour at crossings, which can often put lives in danger.

"The BTP marked vehicle allows officers to target level crossings anywhere in the region and to respond swiftly when misuse is reported by rail staff or members of the public," Ioannou said.

The Western route, which passes through the Thames Valley and the West Country, has 720 level crossings.

Another 12 mobile camera vans are being deployed across the country and half-barriers are set to be installed at the Shiplake crossing by the end of March 2013.

Network Rail is investing £130m to upgrade or close level crossings around the UK, and since 2009 about 600 have been closed.