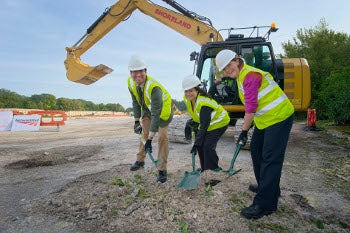 Network Rail has started work on a major signalling and training centre in Basingstoke in the UK to manage large areas of railway in London and the south west.

The new Basingstoke Rail Operating and Training Centre (ROC) is one of 12 centres that are being built by Network Rail across the UK as part of a new wave of signalling operations in the country.

The ROCs will gradually replace over 800 signal boxes and other operational locations that are currently in use across the network.

Network Rail and South West Trains Alliance commercial director Sam McCarthy said that the Basongstoke ROC will be a vital part of operating the railway in the south and south west of England and will establish Basingstoke as an important part of the national rail network.

"[The ROC] will help to provide a better, safer and more reliable railway and deliver significant efficiencies to contribute to making the railway more cost effective," McCarthy added.

The new centre will control trains to help reduce delays, boost performance and capacity, as well as provide better information to passengers travelling between London Waterloo and the south coast, one of the busiest routes in the UK.

"The ROCs will gradually replace over 800 signal boxes and other operational locations that are currently in use across the network."

Basingstoke MP Maria Miller said that the development will bring huge benefits for Basingstoke with new jobs for local people, new parking facilities and a footbridge.

The new centre is being built by BAM Construction and is scheduled for completion by the end of 2014.

The 12 new centres, to be built over a 30-year period, are expected to help Network Rail save more than £2.5bn over the following 60 years, and will form a key part of Network Rail’s aim to deliver a safe, punctual and cost-efficient railway.