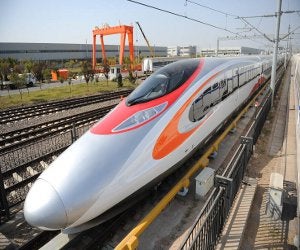 The new train will operate on the Hong Kong section of the Express Rail Link, which aims to create a new experience for passengers travelling between Hong Kong and mainland China.

Currently being built by CSR Qingdao Sifang at a cost of HKD1.74bn ($224.4m), the trains are based on the design of China’s CRH380A model.

Featuring a trailer car at each end with six motor cars in the middle, the new train can accommodate 579 people and can travel at a top speed of 350kmph. On the Hong Kong section, the train will travel at a speed limit of 200kmph.

"Not too long from now, trips between Hong Kong and Guangzhou will be measured in minutes instead of hours."

MTR Corporation CEO Jay Walder said: "This marks a significant milestone in the Express Rail Link project, moving us a step closer to the reality of revolutionised journeys to the mainland of China.

"Not too long from now, trips between Hong Kong and Guangzhou will be measured in minutes instead of hours."

The new train will be prepared for track testing on the mainland to evaluate its operational capabilities, prior to being delivered to Hong Kong in April 2014.

As part of its commissioning process, the train will also be put through integrated testing with other systems to ensure operational reliability along with systems such as signalling, communications and power supplies.

An independent safety assessor has been appointed by MTR to verify the train’s safety and related signalling systems.