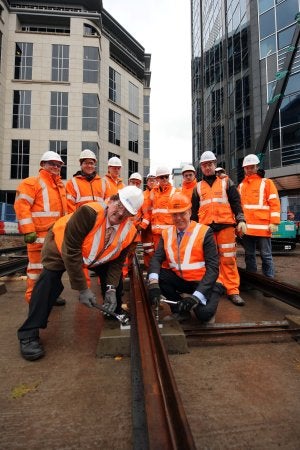 The Midland Metro light rail system’s first tracks have been laid, as part of its extension at Colmore Gate, Bull Street in Birmingham.

The extension will enable trams to run through the streets of the city centre from Snow Hill station to New Street station. In addition, it is expected to create more than 1,300 new jobs, while improving the West Midlands economy by over £50m per year.

Of the £127m total project cost, around £40m will be allocated for new Urbos 3 trams, which will run on the Metro from Birmingham to Wolverhampton. The trams are being built by Spanish manufacturer CAF and are anticipated to operational in 2014.

Under the project, a total track of 1.5km length will be laid and 3,000 sleepers will be installed.

"Despite the complexity of the construction works and the highly confined space we have to operate in, the works are progressing at an excellent pace."

The extension project, which is being executed by construction firm Balfour Beatty, is scheduled to open in 2015. It will run from Snow Hill through Bull Street, Corporation Street and Stephenson Street, terminating outside New Street station.

Balfour Beatty project director John Daft said: "We are delighted to be celebrating the achievement of this significant milestone with Centro and Birmingham City Council.

"Despite the complexity of the construction works and the highly confined space we have to operate in, the works are progressing at an excellent pace."

Centro is also planning to extend the Metro from New Street Station via Paradise Circus and up to Centenary Square. There will also be another extension in Wolverhampton city centre with financial assistance from Wolverhampton City Council, Neptune Developments, Network Rail and Virgin Trains as part of the Interchange Phase 2 project.

Meanwhile, construction work is underway on a major extension of the Metro maintenance depot at Wednesbury, England.