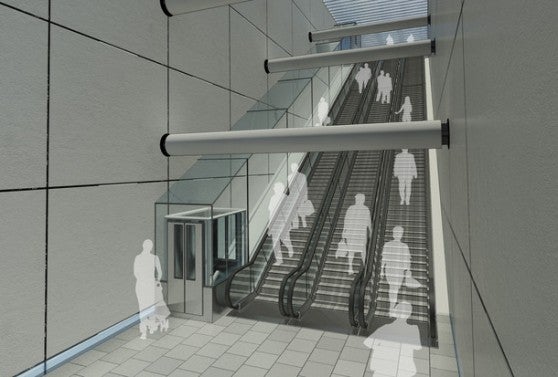 Crossrail and Transport for London (TfL) have awarded two separate contracts to Kone and Otis to install incline lifts and escalators at Crossrail stations in the UK.

Under a £45m deal, Kone will install 54 incline lifts on the TfL network, including 49 at Crossrail stations and five at Bank, Greenford and Hammersmith Tube stations.

The contract also includes maintenance of the lifts for a period of 22 years, while additional lifts are expected to be added to ensure step-free access across TfL.

Crossrail procurement director Martin Rowark said that all Crossrail stations in central London will have step-free access from street to train.

"The new incline lifts offer an added benefit by allowing groups travelling together to have passengers with wheelchairs, buggies or large baggage to take an incline lift, while friends and family take an escalator directly alongside," Rowark said.

"These incline lifts will allow Crossrail to provide full step-free access at Farringdon and Liverpool Street stations where the platforms will sit below existing buildings, preventing the installation of traditional vertical lifts."

London Underground programme director of stations Miles Ashley said that Greenford station will benefit from the first of five incline lifts that will provide improved access to the customers.

"Each of the 428 escalators across the London Underground network operate intensively for 20 hours a day and need to be built to last."

Kone beat Otis, Fujitec, Stannah and Schindler to win the contract for the installation of the lifts, which will also be located at Bond Street, Whitechapel, Tottenham Court Road, Paddington and Custom House.

The deal will see Otis maintain the escalators for 30 years; the installation of the new escalators for the tube network is scheduled to start in early 2013, with work commencing from 2014 at the Crossrail stations.

According to TfL, each of the 428 escalators across the London Underground network operate intensively for 20 hours a day and need to be built to last.

Around 50 escalators will also be installed at 13 stations across the Tube network in addition to escalators for the Crossrail stations.

The Crossrail service, scheduled to commence in 2018, will pass through 37 stations and run 118km from Maidenhead and Heathrow in the west, through new twin-bore 21km (13 miles) tunnels to Shenfield and Abbey Wood in the east.

"Crossrail will carry over 200 million passengers each year and escalators will play a crucial role in getting passengers into the massive new stations and on to trains that will whisk them across London," Rowark said.