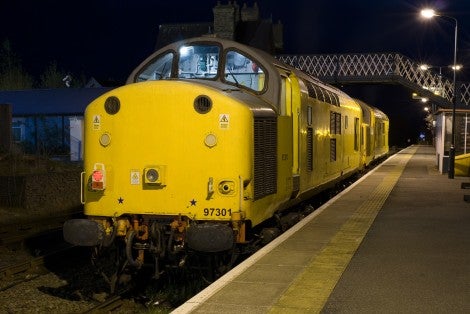 Hitachi Rail Europe has taken a step forward in its European Train Control System (ETCS) Level 2 operation by connecting its onboard ETCS solution to the Network Rail Cambrian Line signalling system in the UK.

According to Hitachi, the connection was achieved during its Verification-Train 3 project to trial ETCS onboard equipment in the UK.

As part of the trial, a Class 97301 locomotive was retrofitted with the ETCS onboard system to prove interoperability with other systems currently in use.

During the trial, the locomotive was driven under its own power with ETCS Level 2 through the GSM-R radio network in several operational modes including Staff Responsible, On Sight, Shunting and Full Supervision.

The trial showed that the Hitachi onboard ETCS solution on the Network Rail Signalling System and Control Centre in Wales worked without any system failures.

"The connection was achieved during its Verification-Train 3 project to trial ETCS onboard equipment in the UK."

Hitachi Rail Europe signalling project manager Richard Tomlin said that the successful trail allows the company to move into the next phase of test running.

"It gives us the opportunity to prove to the industry that our technology has full interoperability and can communicate with other suppliers’ systems," Tomlin said.

Network Rail project manager Jim Doughty said: "The success of the Hitachi trials demonstrates Network Rail’s continued commitment to supporting the purveyors of ETCS Onboard Systems and to providing a fully interoperable ETCS system within the UK."

Image: During Hitachi’s Verification-Train 3 project, a Class 97301 locomotive was retrofitted with the Hitachi onboard ETCS solution to prove interoperability. Photo: courtesy of Hitachi Rail Europe.