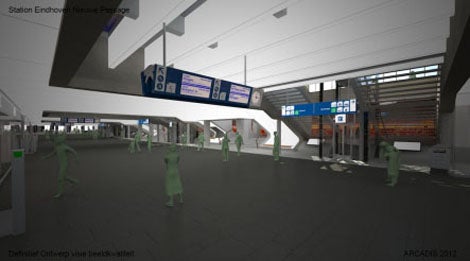 Dutch infrastructure firm Heijmans has won a €32m contract from ProRail to build the new Eindhoven station tunnel in the Netherlands.

Construction of the new tunnel is scheduled to start in the first quarter of 2013 and the entire project is expected to be completed by the summer of 2016.

Upon completion, the tunnel will be used as a pedestrian link between the northern and southern sections of the city, and is expected to be used by around 115,000 passengers daily by 2020.

Heijmans said that it offered the best-value bid in the European tendering process to win the contract.

Work under the contract will be carried out by Heijmans' civil engineering and non-residential building business units.

"Eindhoven station will continue to operate normally during the construction of the tunnel."

According to Heijmans, Eindhoven station will continue to operate normally during the construction of the tunnel.

As part of the deal, Eindhoven railway station will be refurbished as the current station has not been designed to accommodate future increases in passenger volumes.

The new station tunnel will be installed with lifts and escalators to all platforms, providing access for disabled passengers.

ProRail, NS Stations and the Municipality of Eindhoven are responsible for the expansion of the station tunnel, while co-financing is provided by the Netherlands government and the Province of Noord-Brabant.

Image: The station will be equipped with lifts and escalators to provide improved access for disabled passengers. Credit: Heijmans.