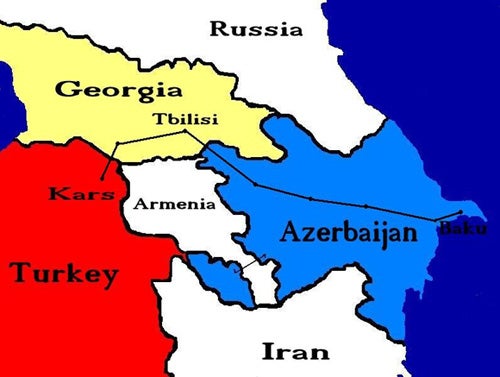 The BTK railway will connect Kars in Turkey, Tbilisi in Georgia and Baku in Azerbaijan and is expected to be commissioned in 2013.

Georgia Minister of infrastructure and regional development, Ramaz Nikolaishvili, said that cargo and passengers will be soon transported via the Baku-Tbilisi-Kars railway.

"Definitely, this is the shortest way between Europe and Asia," Nikolaishvili said.

Under the project, a new station building in Akhalkalaki is being built by German architect Jurgen Mayer, as well as the wheel change centre and a 4km tunnel, which is under construction on the border between Georgia and Turkey.

The project will also see construction of the 98km Kars-Akhalkalaki railway line, out of which 68km will pass through Turkey, while the remaining 30km will be built in Georgia.

In addition, Georgia will rebuild a 183km section of the Akhalkalaki-Tbilisi-Marabda railway, which will increase the cargo carrying capacity to 15mt every year.

Work on the project started in 2007 under a trilateral agreement among Georgia, Azerbaijan and Turkey.

Azerbaijan has spent about $850m in the project, including the construction of the Georgian section, for which the country had extended a loan of $775m to Georgia in 2007.

A loan of $775m has been allocated by Azerbaijan for Georgia to build and renovate the Georgian section of the Baku-Tbilisi-Kars railway.

Image: The Marabda to Kartsakhi line in Georgia has been built under the BTK project. Photo: courtesy of Railway Technology.