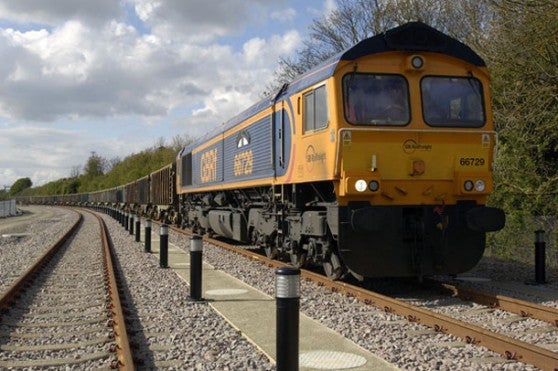 GB Railfreight has commissioned a freight rail line in the UK between London and Northfleet. The company has already begun testing locomotives, which will be used by Crossrail to transport excavated material, along the 21km twin-bore rail tunnel.

The freight link has been built for Lafarge, reinstating a disused freight line to transport excavated materials, generated from the western tunnels projects between Royal Oak and Farringdon, to Northfleet, Kent.

The rail link, which has been implemented by Balfour Beatty Rail as the first stage of Lafarge’s regeneration project, had a length of 2.25km, while 4.75km of new track has been laid as part of the project.

Crossrail programme director Andy Mitchell said: "This new rail link will help us minimise lorry use in central London, as well as ensuring the efficient transfer of excavated material to sites where it can be best used for environmental improvement."

After the material is transported to Northfleet, it will be transferred by ship to regeneration sites, including a 1,500 acre RSPB nature reserve at Wallasea Island, Essex.

GB Railfreight will deploy a pair of Class 66 locomotives and two sets of 27 JNA wagons, each of which has a has a carrying capacity of 76.9t, to carry the excavate materials.

In February 2012, C300 western running tunnels contractor BFK JV made up of BAM, Ferrovial and Kier, awarded the contract to GB Railfreight.

Tunnelling for Crossrail will generate about 6 million tonnes of excavate material during the construction of the 21km twin-bore tunnel.

Previously, Crossrail had awarded BFK JV the contract to construct the western running tunnels between Royal Oak and Farringdon.

Image: The length of the new freight line is around 2.25km with 4.75km of new track provided. Photo: courtesy of Crossrail.