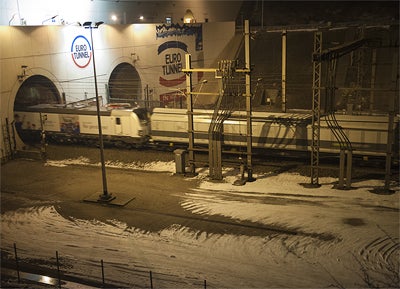 Eurotunnel and Siemens have tested the Vectron locomotive in the Channel Tunnel as part of an effort to increase cross-Channel rail freight.

The tests were intended to assess the locomotive’s compatibility with Channel Tunnel systems and safety rules, as Eurotunnel expects that open-access freight operators will be able to use TSI-compliant four-axle locomotives as well as six-axle models.

The Vectron locomotive, in standard configuration and hauling wagons with a total weight of 1,350t, entered the tunnel via the French portal and completed a series of traction, braking and pantograph tests.

The Vectron exited the tunnel at Folkestone before returning to France for a second phase of tests.

The test runs confirmed that the standard four-axle locomotives can operate without any problems in the Channel Tunnel and will be capable of hauling rail freight between the continent and the UK.

"The approval of new rolling stock is the necessary complement to the open access set up by Eurotunnel," Boudoussier said.

"The tests mark Eurotunnel’s contribution to the construction of the European railway network," Boudoussier.

Image: Tests carried out on the Siemens Vectron locomotive confirmed that standard four-axle locomotives can operate without any problems in the Channel Tunnel. Photo: courtesy of Eurotunnel.