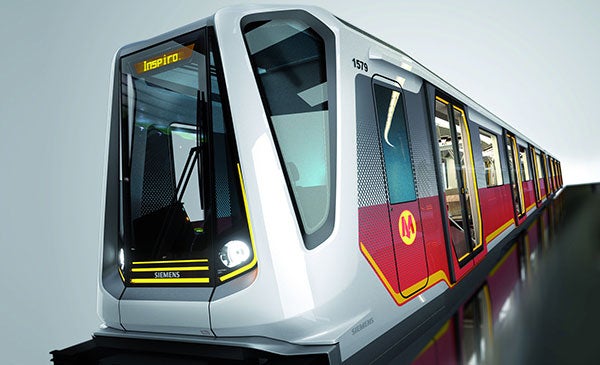 The European Investment Bank (EIB) is providing a loan of PLN555m (€139m) to support the purchase of 35 new metro trains for the Warsaw metro line in Poland.

The EIB funding is for the €272m order placed by Warsaw’s metro operator, Metro Warszawskie for 35 six-car Inspiro trains, in February 2011, with a consortium of Siemens and Newag, the Polish rolling stock manufacturer.

Of the new Inspiro trains, 15 will be used to increase frequencies on the existing Warsaw Metro line 1, while the remaining 20 will operate on line 2, which is currently being built.

Scheduled to be delivered from the end of 2012 through to 2013, the new metro trains will use advanced technology, increasing the energy efficiency of Warsaw’s metro fleet.

The level of service and quality of public transport is expected to be enhanced by increasing the metro’s rolling stock.

Metro Warszawskie’s order with Siemens included the delivery, commissioning, testing and certification of the trains and is part of the project design, construction and rolling stock procurement programme for the central section of Warsaw metro line 2.

"The level of service and quality of public transport is expected to be enhanced by increasing the metro’s rolling stock."

The first ten trains under the order are said to be completely manufactured at the Siemens Mobility plant in Vienna, Austria, while the remaining will be partly assembled by the partner company Newag in Nowy Sacz, Poland.

The six-car train will have a length of 117.8m and will be capable of accommodating 1,450 passengers, including 256 seats.

The planned 19km Warsaw metro line 2 will start from Chrzanów station and end at Rembielinska, serving 19 stations running in the east-west direction.

Earlier in September 2011, the European Bank for Reconstruction and Development (EBRD) provided a loan of €80.6m to fund the purchase of the new Warsaw metro trains.

Image: 20 new Siemens Inspiro trains will operate on Warsaw metro line 2, while 15 will run on the existing Line 1.