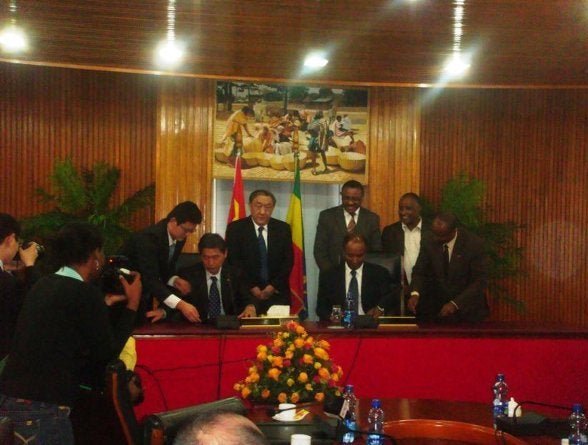 Ethiopian Railways (ERC) and China Communication Construction (CCCC) have signed a $1.5bn agreement to build a 268.2km railway line in the northern part of Ethiopia.

According to ERC, the agreement includes an engineering, procurement and construction contract covering 29 large bridges and 19km of tunnelling work.

The line will run from Mekelle Woldya to Hara Gebeya, connecting Ethiopia’s northern regions with the under-construction port at Tadjurah in Djibouti, providing an alternative route.

Scheduled for completion by July 2015, the line will be used to transport passengers and potash from mines being developed in the northeast of the country.

CCCC, a Chinese government-owned transportation infrastructure firm, will provide a substantial part of the funding to complete the project.

Ethiopia is in the middle of a five-year national growth and transformation plan to modernise and upgrade its infrastructure and industries, with the aim to develop a 2,395km railway network nationwide, out of which 1,808km is planned to be completed by 2015.

In 2011, the Ethiopian government signed two agreements with Chinese companies to build a 4,744km rail network to Djibouti.

In December of the same year, ERC sealed a contract with China Civil Engineering Construction (CCECC) to build the 339km Mieso-Dire Dawa-Dewele railway line, which is part of the Addis Ababa-Dire Dawa-Djibouti railway project.

The line is single track with standard gauge (1.435m) and will provide services both for passengers and freight transportation, as well as linking Addis Ababa with the port of Djibouti.

Ethiopia has already received a $300m loan from India for a 665km rail line to link the country with neighbouring Djibouti, which is estimated to cost $1.2bn.