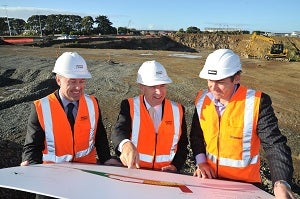 The depot will be used to maintain new electric trains, which are set to be introduced to the Auckland suburban rail network from early 2014.

The new 7,650m² facility, located next to the south-western expressway on Wiri Station Road on the old Winstone's Quarry Site, will have seven maintenance berths, including systems that lift trains to enable maintenance, high-level platforms to access train roofs, along with a wheel lathe.

Mayor of Manukau, Auckland Len Brown said: "The Wiri Depot contract is a critical milestone in the electrification of Auckland's rail network and a vital move towards a single, efficient, integrated transport network."

Upon completion the depot will be jointly managed by Veolia and Construcciones y Auxiliar de Ferrocarriles (CAF). It will also provide maintenance services for the 109 electric trains that are scheduled to arrive from 2014.

Construction is scheduled to start on the old Winstone's Quarry site before the end of May 2012 and should be completed in June 2013. Auckland transport started earthworks in January 2011, to prepare the site for the depot's construction.

Image: The new Wiri Maintenance and Stabling depot will be used to maintain 109 electric trains that are scheduled to be introduced from 2014. Photo: courtesy of Auckland Transport.