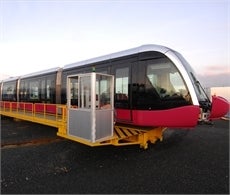 The French city of Dijon has opened the first of two lines on its new light rail network, six months earlier than the original scheduled completion.

The new 8.5km tram route, known as T1, has 17 stations and runs on an east-west alignment from the city’s mainline railway station to the eastern suburb of Quetigny.

The route passes through the city centre and other stops are located near the University of Dijon, the main hospital campus and the city’s football stadium.

T2, covering 12km from Valmy to Chenôve, is scheduled to open in December 2012. It will connect a park-and-ride station at Valmy with the city centre and Chênove, as well as share tracks with T1 on the central section between République and Foch.

Alstom delivered the first of 33 Citadis trams for the Dijon two-line network in January 2012.

"The new 8.5km tram route, known as T1, has 17 stations and runs on an east-west alignment from the city’s mainline railway station to the eastern suburb of Quetigny."

The delivery was part of the €100m order placed by the cities of Brest and Dijon in September 2009 with Alstom to supply 53 Citadis tramsets.

Out of the total, Brest will receive 20 tramsets to be used on a 14.3km rail line, while Dijon will use 33 tramsets on its new lines.

According to Alstom, the trams will help protect the environment by generating five decibels less noise than motor traffic; they are also 98% recyclable and consume 10% less energy than a traditional tram.

Dijon’s tramway will be operated by Keolis and is expected to transport an estimated 85,000 passengers a day.