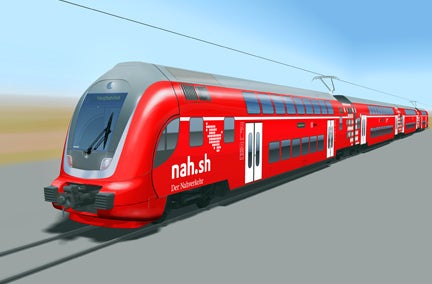 Deutsche Bahn has ordered 16 TWINDEXX Vario multiple units from Bombardier Transportation for $208m, which will be deployed on the Kiel-Hamburg and Flensburg-Hamburg railway lines in northern Germany.

The new trains are scheduled to be delivered in the second-half of 2014 and operate along the LVS Schleswig-Holstein network at a speed of up to 160km/h.

Bombardier Transportation Germany chairman of the managing board Michael Clausecker said: "With this order, we will be supplying Deutsche Bahn with the 2,000th of these modern double-decker coaches."

The trains will be equipped with MITRAC 1000 propulsion and control system which allows trains to accelerate quickly to an optimum speed.

Wider doors in the train allow the passengers to enter and exit quickly during peak hours.

The centre buffer coupling in the trains allows double traction operation which leads to smooth travelling without the need to change trains in Neumünster, Bombardier said.

Coaches for the double-decker trains will be built at Bombardier’s Görlitz plant in Germany, while the bogies will be built at its facility in Siegen, Germany, and the propulsion and control system will be manufactured at its site in Västerås, Sweden.

The deal is part of a framework agreement between Bombardier and Deutsche Bahn in December 2008.

Deutsche Bahn has ordered 135 of the variable double-decker coaches for intercity transport as well as 18 intermediate coaches and three double-decker power cars for regional services.