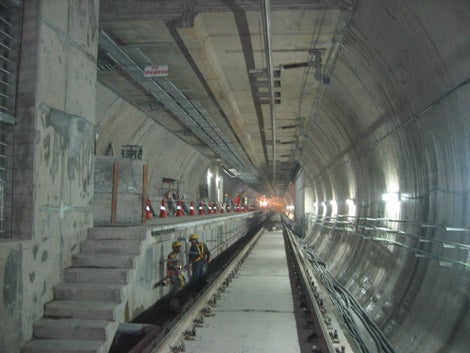 Delhi Metro Rail Corporation (DMRC) will install a new centralised data management system to gather data generated by 34 tunnel boring machines (TBM) to be used during the construction of the 53km-long underground corridors of Phase III of the metro project.

During the third phase of the metro project, DMRC will use the TBMs to dig 74 tunnels for the underground corridors in Delhi and the National Capital Region (NCR).

The centralised data management system will act as a tool for securing data, visualisation and reporting.

The system will also reduce risk by offering immediate information on the progress of the tunnels and their alignment, ground settlement and the status of buildings and structures along the underground alignment.

General project information, ongoing process data, construction schedule, geological measurements, along with 3D movement of the TBMs and readings from devices such as inclinometers and extensometers, will be integrated in the new system.

"The centralised data management system will act as a tool for securing data, visualisation and reporting."

A map viewer will also be available in the system to show all TBM positions.

The system will also feature a pre-set alarm function with project-specific trigger levels that give automatic alarms in real-time through mobile communication devices, by visualisation on screen or by e-mail.

A graphical user interface (GUI) for database architecture in the system will record TBM parameters during tunnel excavation.

Tunnelling work under Phase III of the Delhi metro project is scheduled to be completed by mid-2015, with three tunnels for the section from Central Secretariat to Mandi House already completed.

Image: The centralised data management system will gather data generated during the construction of the Delhi Metro’s new underground corridors.