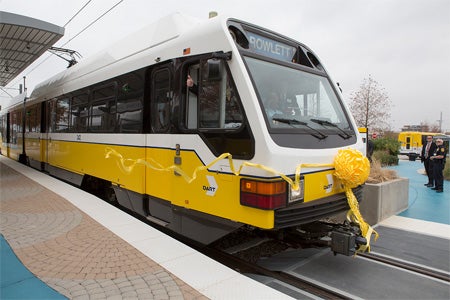 The Dallas Area Rapid Transit (DART) in the US has opened two new light rail extensions, taking the total length of the city’s light rail system from 123.9km to 137km.

The two new rail segments include a 7.2km extension of the Blue Line to Downtown Rowlett Station and the Orange Lin, which has been extended 6.4km into Irving and closer to Dallas Fort Worth (DFW) International Airport.

The $360m extension to Downtown Rowlett Station marks the first expansion of the Blue Line since it reached Garland in November 2002.

A further extension of the Blue Line from its southern Ledbetter Station to the University of North Texas at Dallas is scheduled to be opened in late 2016.

The new extension of the Orange Line adds stations at North Lake College and Belt Line Road. At Belt Line Station, passengers will be transported via buses to and from Dallas Fort Worth (DFW) International Airport.

"DART has built around 64.3km of track to improve transit accessibility across the Dallas area."

The remaining 8.4km section to DFW International Airport is expected to be completed in 2014, linking downtown Dallas to the airport.

The first 7.2km section of the Orange Line from Dallas to Irving was opened in July 2012 with three stations running from Bachman Station and serving the University of Dallas, Las Colinas Urban Center and the Irving Convention Center.

According to DART, the Orange Line is a core project of the agency’s $3.4bn light rail expansion programme to extend the network to 145km by 2014.

In the last three years, DART has built around 64.3km of track to improve transit accessibility across the Dallas area.