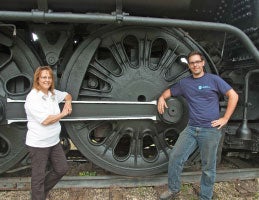 The Coalition for Sustainable Rail (CSR), a collaboration between the University of Minnesota’s Institute on the Environment (IonE) and Sustainable Rail International (SRI), is planning to develop the world’s first carbon-neutral high-speed locomotive.

CSR researchers said that the main aim of the project is to develop a powerful passenger locomotive that can reach speeds of 130mph, proving the viability of solid biofuel and modern steam locomotive technology.

IonE’s Initiative for Renewable Energy and the Environment Special Projects director Rod Larkins said: "Once perfected, creating the world’s first carbon-neutral locomotive will be just the beginning for this technology which, we hope, will later be used for combined heat and power energy in the developing world as well as reducing the United States’ dependence on fossil fuels."

The locomotive will run on torrefied biomass (biocoal), which has the same energy density and material handling properties as coal. But unlike coal, the biofuel contains no heavy metals and will emit less ash, smoke and volatile off-gases.

According to preliminary research, the CSR’s test locomotive requires less maintenance cost and less fuel and is able to burn biocoal efficiently. The company said that the new steam locomotive will also demonstrate better horsepower at higher speeds compared to the current diesel-electric locomotives used in the US.

In November last year, SRI acquired the Santa Fe steam locomotive 3463 (CSR 3463) from the Great Overland Station in Topeka, Kansas, to undertake the trial. The vehicle will be reconfigured and tested as part of the CSR Project 130.

SRI completed a cosmetic restoration and stabilisation of the CSR 3463 locomotive in Topeka this month and is planning to move the locomotive to Minneapolis by 2013, where it will be reconfigured.

Image: CSR researchers aim to develop a powerful carbon-neutral passenger locomotive that can reach speeds of up to 130ml/hr. Photo: courtesy of CSR.