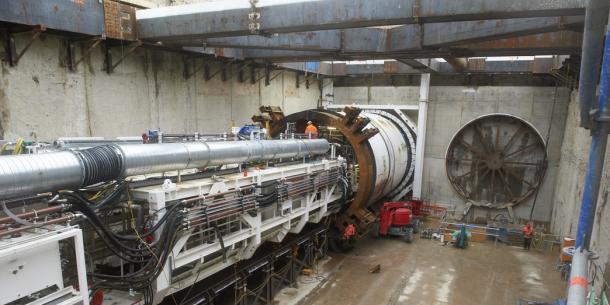 Crossrail‘s fifth tunnel boring machine (TBM), Sophia, has started work on the 2.6km Thames Tunnel between Plumstead and North Woolwich as part of the Crossrail project in London, UK.

Sophia is expected to drill at an average rate of 100m per week, installing precast concrete segments as rings to form the tunnel lining as it moves forward.

Following the opening of Crossrail in 2018, 12 trains will be operated on the Thames route linking south-east London and the Royal Docks with Canary Wharf and central London.

The Crossrail journey time from Abbey Wood to Bond Street is expected to be reduced by up to 20 minutes and 40 minutes for Heathrow.

Unlike the other TBMs currently in operation, Sophia is a slurry machine, specifically equipped to handle the chalk, flint and wet ground conditions in south-east London.

Mary, the sister TBM of Sophia, is scheduled to start tunnelling in mid-2013 and will build a second tunnel beside the first one.

Under the tunnelling process, the excavated soil will be pumped out as liquid slurry to a special site treatment facility at Plumstead, where it will be separated later sand, gravel, water and chalk.

"Sophia is expected to drill at an average rate of 100m per week."

Crossrail chief executive Andrew Wolstenholme said: "The benefits for south-east London are huge; for the first time people living between Abbey Wood and the Royal Docks will be able to travel right through the centre of the capital without having to change trains, bringing Canary Wharf, the West End and Heathrow closer than ever before."

The entire Crossrail service will pass through 37 stations and run 118km from Maidenhead and Heathrow in the west, through new twin-bore 21km tunnels to Shenfield and Abbey Wood in the east.

The first two TBMs, Phyllis and Ada, were launched in May and August 2012, while the third and fourth machines, Elizabeth and Victoria, were lowered into the ground in December 2012.