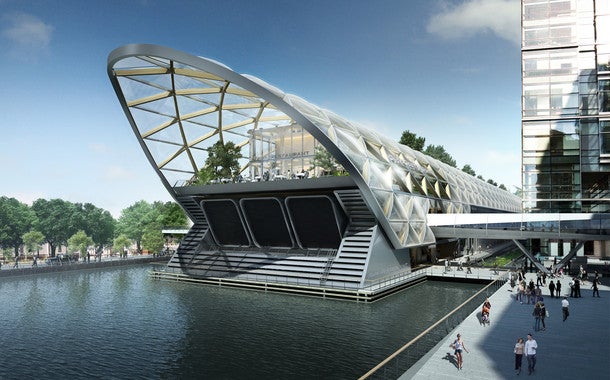 Canary Wharf Crossrail station will be one of the largest stations on the Crossrail route, which will cost £500m, with CWG investing £150m.

Crossrail area director central Bill Tucker said that the construction of the company’s first excavated platform level is now complete and has been delivered five months early by CWG.

"Preparations will now begin for the arrival of the tunnel boring machines next year," Tucker said.

"When the tunnelling machines breakthrough into the station box from the east they will undergo maintenance before being moved to the other end of the station box where they will then set off on their journey en route to Farringdon via Whitechapel and Liverpool Street stations."

Twin 7.6m diameter rings have been created at each end of the structure to receive the eastern tunnel boring machines 28m below the surface of the dock,

CWG will undertake the station fit out work which is scheduled to be completed in 2015 and includes building the levels sitting above the station box.

After completion the station will have six lifts and 19 escalators to handle 25 million passengers every year.

The company said that journey times will be reduced to many destinations across London, which will take six minutes to travel to Liverpool Street, eight minutes to Farringdon and 39 minutes to Heathrow.

Crossrail services at Canary Wharf are scheduled to start in 2018 with 12 trains per hour in each direction during the peak.

Image: Canary Wharf Crossrail station will be one of the largest stations on the Crossrail route and will handle 25 million passengers every year. Photo: Crossrail.