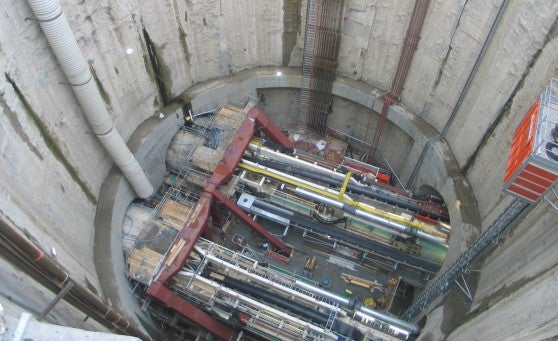 In October 2012, Elizabeth and sister TBM Victoria were lowered into a 40m shaft in the Limmo Peninsula near Canning Town station in east London, UK.

Victoria is expected to commence work on the eastern tunnels later in 2012.

The first of 110,000 concrete segments, which were produced at a plant in Chatham, Kent, has now been placed by Elizabeth to line the eastern tunnels, which will be Crossrail‘s longest tunnel section.

Ships and barges will be used to deliver the concrete segments and transport excavated material from the east London site.

Crossrail chief executive Andrew Wolstenholme said: "With the start of work on Crossrail‘s eastern tunnels we are seeing the biggest construction project in Europe now tunnelling on both sides of the capital."

Both Elizabeth and Victoria will excavate the longest section of the project beneath the River Lea towards the new station box at Canary Wharf, where work is underway to allow the TBMs to enter the station more easily in 2013.

Before continuing their journeys towards Whitechapel, Liverpool Street and Farringdon, both TBMs will receive maintenance in the Canary Wharf station box.

The tunnels between the Docklands and Farringdon are scheduled to be completed in late 2014.

"In October 2012, Elizabeth and sister TBM Victoria were lowered into a 40m shaft in the Limmo Peninsula near Canning Town station in east London, UK."

Crossrail started tunnelling from the Royal Oak portal to Paddington in May 2012 with its first TBM, Phyllis, which was followed by Ada in August 2012.

The tunnels between Royal Oak and Farringdon are scheduled to be completed in late 2013.

Eight TBMs will eventually be used to excavate 21km of twin bore tunnels running between Royal Oak in west London and Pudding Mill Lane and Plumstead in east London.

Scheduled to be completed in 2018, the £14.8bn Crossrail service will pass through 37 stations and run 118km from Maidenhead and Heathrow in the west, through new twin-bore 21km tunnels to Shenfield and Abbey Wood in the east.

Image: The TBMs are expected to complete tunnelling work between the Docklands and Farringdon in late 2014. Photo: courtesy of Crossrail.