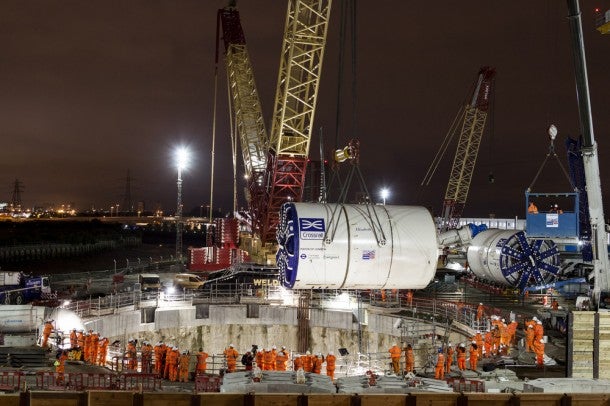 Crossrail has moved forward in the construction of its tunnel between Royal Oak and Farringdon by lowering a 550t tunnel boring machine (TBM), dubbed Elizabeth, into a 40m shaft in the Limmo Peninsula near Canning Town station in east London, UK.

Europe’s largest cranes carried out the operation ahead of the start of tunnelling for the 8.3km Limmo Peninsula – Farringdon section of the Crossrail project.

A Crossrail team at Limmo Peninsula will repeat the operation with another TBM, Victoria, which along with Elizabeth will start tunnelling in late 2012 under the River Lea towards Canary Wharf.

Both Victoria and Elizabeth will excavate the longest section of the £14.8bn project’s tunnel to Farringdon via Canary Wharf, Whitechapel and Liverpool Street.

Crossrail said Canary Wharf station has begun preparations to receive Elizabeth, with workers breaking out the hard concrete at the tunnel eyes to allow for the machines to enter the station more easily in 2013.

Crossrail chief executive officer Andrew Wolstenholme said: "When Crossrail is completed it will dramatically improve transport in east London and bring places like Custom House and Abbey Wood to within 20 minutes of London’s major employment areas."

Assembly of the TBMs and their gantries will be finished underground by two 148m tunnelling factories.

Following assembly, the TBMs will start work on the first of Crossrail’s two eastern tunnels running between the Docklands and central London.

The temporary bottom of the two launch shafts has been reached and work has started on sprayed concrete-lined tunnels to connect them.

"The tunnels between Royal Oak and Farringdon are scheduled to be completed in late 2013."

A large conveyer system will be built to take the earth from the bottom of the shaft on to nearby ships at a jetty, which will take 1.2million tonnes of earth to Wallasea Island to create a new RSPB nature reserve.

Crossrail started tunnelling from the Royal Oak portal to Paddington in May 2012 with its first TBM, Phyllis, which was followed by Ada in August 2012.

The tunnels between Royal Oak and Farringdon are scheduled to be completed in late 2013.

A concrete segment plant at Old Oak Common has produced around 12,000 segments, with 3,680 already used on the western tunnel.

Eight TBMs will eventually be used to excavate 21km of twin bore tunnels running between Royal Oak in west London and Pudding Mill Lane and Plumstead in east London.

Image: The 550t TBM Elizabeth is lowered into a 40m-deep shaft to start tunnelling from the Limmo Peninsula to Farringdon in late 2012. Photo: courtesy of Crossrail.