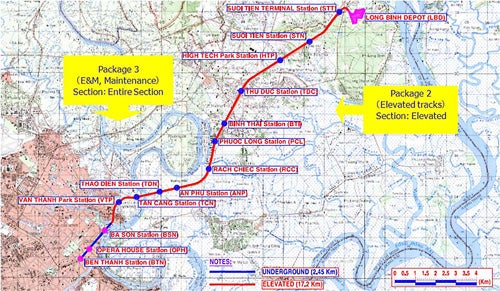 Work on the the 19.7km metro line will include construction of a 17.2km elevated section, as well as a 21ha train yard.

Subsequent contracts are scheduled to be offered for a 2.6km underground section of the line.

On completion, the metro line will run via District 1, Binh Thanh District, District 2, District 9 and Thu Duc District in HCMC, before reaching Di An Town in Binh Duong province.

Three stations will be built on the underground route, while the remaining above-ground section will have 11 stations.

The new line is expected to ease traffic in the Vietnamese city, with scheduled completion in 2017 and operation starting in 2018.

The Ben Thanh-Suoi Tien service, which will connect the centre of Ho Chi Minh City with its north-eastern district, will have the capacity to carry up to 526,000 passengers a day.

The metro route will run with six coaches containing 1,860 passengers and by 2020 the service is expected to transport about 620,000 passengers per day.

With a maximum speed of 80km an hour in tunnels and 110km above ground, the rail service will take 29 minutes to travel from Suoi Tien to the city centre.

Trains will run for 20 hours a day, departing every five to six minutes.

The project’s second bid package is for building underground works, while the third is for equipment supply, which will be developed under other contracts that are set to be signed in the near future.

Image: The Ben Thanh-Suoi Tien metro system is scheduled to be completed in 2016, and by 2020 it is expected to carry 620,000 passengers per day. Photo: Courtesy of Sumitomo Corporation