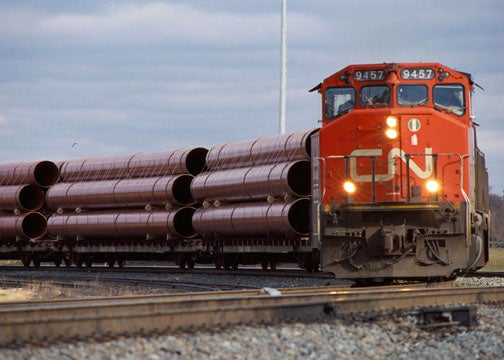 Canadian National Railway (CN) and Superior Silica Sands have entered into a multi-year agreement to haul frac sand from a new processing plant that is currently being built in northern Wisconsin, US.

CN is investing $35m to restore 40 miles of track between Ladysmith and Barron in the state, upgrading track, replacing railroad ties and repairing culverts and bridges to serve Superior Silica Sands’ frac sand plant and other producers in the future.

Production is expected to start in November 2012 at the new plant, which will be capable of producing frac sand products of up to 2.4 million tonnes every year.

The Barron site will link to CN's North American rail network at Ladysmith and is scheduled to be ready for service by the end of 2012.

"The Barron site will link to CN's North American rail network at Ladysmith and is scheduled to be ready for service by the end of 2012."

Upon completion, CN will transport frac sand from northern Wisconsin to shale drilling areas throughout North America, including Western Canada.

"Over the last three years, CN's frac sand market has grown nearly 70%, reaching 35,000 carloads and $100 million in revenue in 2011, and we hope that our end-to-end service focus will help us grow this market to become a $300 million business for CN in the next three-to-five year horizon," Ruest said.

Superior Silica Sands is investing more than $50m in the frac sand operation, including a processing plant and rail storage yard.

Image: CN is spending $35m to restore 40 miles of track between Ladysmith and Barron in north-west Wisconsin. Photo: courtesy of CN.