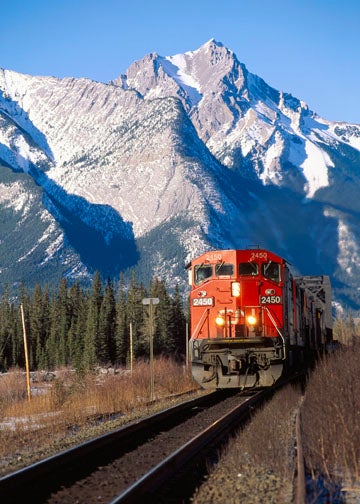 Canadian National Railway Company (CN) has revealed a plan to invest C$1.9bn ($1.9bn) in 2013 to maintain and upgrade its railway network and improve services.

Out of the total investment, CN plans to spend over C$1bn ($1bn) on track infrastructure and to improve the fluidity of the network.

Part of the investment will also be used for the replacement of rail, ties and other track materials, as well as bridge work and capacity and productivity improvements.

CN also expects to spend about C$700m on growing its business in different markets, including investments in transloading operations and distribution centres to transfer freight between rail and truck.

Around C$200m ($200.3m) has been earmarked for the purchase of locomotives, intermodal equipment and vehicles, as well as the refurbishment of locomotives and rail cars.

Over the next two years, the company expects to take delivery of 40 new and 37 second-hand high-horsepower locomotives, in addition to the 25 new and 123 second-hand locomotives that were acquired in 2012.

"Infrastructure investments, the acquisition of new locomotives and equipment and the enhancement of information technology systems will help support our agenda of operational and service excellence," Mongeau said.

"CN plans to spend over C$1bn ($1bn) on track infrastructure and to improve the fluidity of the network."

"They will also make our customers more competitive in domestic and global markets and position us to maximise further business opportunities in intermodal, energy and other resource and manufacturing markets in 2013 and beyond."

The company will continue the double-track portions of its mainline in Saskatchewan and install new signals on its Alberta mainline for faster train movement.

Over the course of 2013, the company plans to continue its upgrades to Kirk Yard in Gary and the former Elgin, Joliet and Eastern Railway line, as well as boost yard capacity and add sidings in the Baton Rouge region.