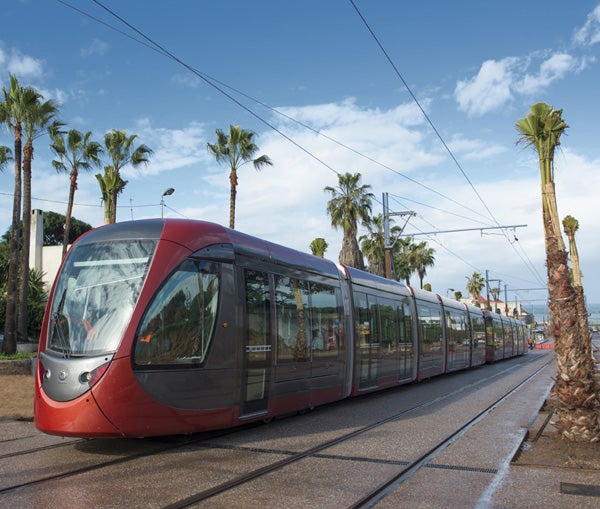 Services will be run at 4min 45s intervals during peak periods and 8min 30s during off-peak hours.

Planned transit time on the new line between Ennassim and Facultés is expected to be 63min 30s, and 69min from Ennassim to Hay Hassani.

Alstom won a €120m contract in 2009 from Casa Transports to deliver 74 Citadis trams coupled in double units for the project.

The 64m trams, which will be capable of accommodating 606 passengers, will be operated on the new line, which has the capacity to transport around 250,000 passengers daily.

The Citadis design was customised to integrate with Casablanca’s architecture, while its 12 side doors and full low-floor concept will provide easy access for passengers.

Alstom was also responsible for the railway signalling and electrical power supply systems for the new tramway network, under an €11m contract it won from Casa in 2010.

The signalling system will give the LRVs 75% priority over road vehicles at intersections and manage road crossings.

The new line will be operated by Casa Tram, which is headed by RATP Dev in partnership with Moroccan Deposit and Management Fund and Transinvest.

Casa Tram contracted Alstom in July 2012 to maintain the system’s vehicles and infrastructure.

RATP Dev was responsible for all the technical operating tests in addition to managing the installation of fixed equipment, energy supply equipment, signalling systems and rolling stock.

Central Command Post (PCC), which is located in Sidi Moumen at the eastern end of the new line, will provide traffic management services for the line.

All the Citadis trams were produced and assembled in France at Alstom’s Reichshoffen plant, while plants at La Rochelle (engineering), Le Creusot (bogies), Ornans (motors), Villeurbanne (onboard electronics) and Tarbes (traction system) were also involved in the project.