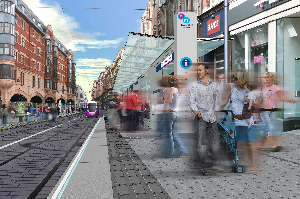 The new trams will replace the current fleet of 16 Ansaldo Trasporti trams to meet an expected rise in passenger demand following the opening of a 1.3km extension.

CAF will build the trams in Zaragoza, Spain, as part of the £40m deal; the trains will be 33m-long, compared to the 24m trams currently operating on the line.

Each of the Urbos 3 air-conditioned trams will have five sections that together can accommodate around 200 passengers, compared to a 156-passenger capacity on the current trams.

The trams will also have passenger and CCTV information, and protection, as well as passenger assistance units at each door. Delivery of the new trams to the West Midlands is scheduled to start in autumn 2013.

The new trams will not be in use for another year, as work is being carried out on a £13m extension of the Metro maintenance depot at Wednesbury, according to local newspaper The Express & Star.

"Each of the Urbos 3 air-conditioned trams will have five sections that together can accommodate around 200 passengers, compared to a 156-passenger capacity on the current trams."

The trains are scheduled to be used on the line between Wolverhampton St George’s and Birmingham Snow Hill months before an extension to New Street via Bull Street, Corporation Street, and Stephenson Street is completed.

In May 2012, Balfour Beatty won a contract from Centro to build an extension line of the metro network between Birmingham and Wolverhampton in the UK as part of a £127m project.

The extension of the metro network will offer a faster link between Birmingham’s two major rail stations, transporting more than 3.5 million passengers a year to the city’s shopping district.

Balfour Beatty will work with Centro’s project team and stakeholders to finalise the design and construction proposals, while work under the project is scheduled to start in early 2013 and finish in 2015.

Image: The 25 new Urbos 3 trams scheduled to be delivered in autumn 2013 will operate on the Midland Metro system between Birmingham and Wolverhampton. Photo: courtesy of Centro.