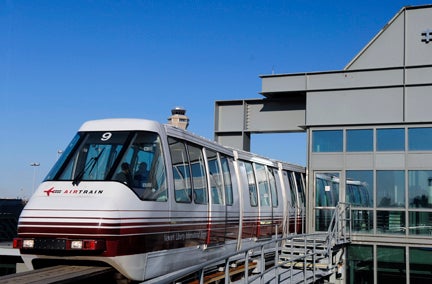 Bombardier Transportation has won a $243m contract from the Port Authority of New York and New Jersey (PANYNJ), US, to continue operations and maintenance (O&M) services for a further ten years on the AirTrain monorail system at Newark Liberty International Airport in New Jersey.

The AirTrain system first opened in 1996 and operates a fleet of 12 six-car Bombardier Innovia Monorail 100 vehicles across the network.

Asset upgrade works under the deal will include the overhaul of key sub-systems, including vehicles, track work, communications, power distribution systems and maintenance recovery vehicles.

Since its opening, Bombardier has provided O&M services on the system, which has since been extended to the North East Corridor (NEC) rail line and had its fleet expanded to 18 six-car trains.

More than 33 million passengers travelled through the airport in 2011; AirTrain operates 24 hours a day, 365 days a year to keep up with passenger volumes.

Bombardier Transportation President of systems Eran Gartner said: "We will ensure that the AirTrain monorail system continues to form the backbone of ground transport at Newark Liberty International Airport, transporting thousands of riders daily until 2020 and beyond."