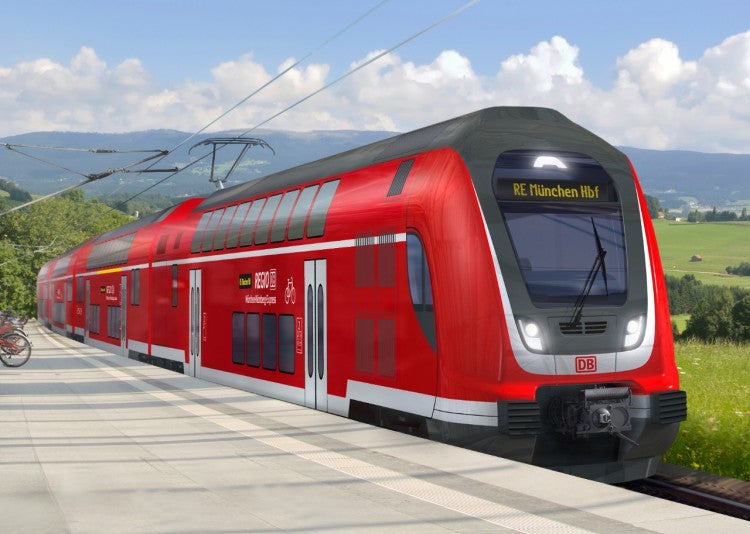 The order is part of a framework agreement signed in 2008, under which DB has already ordered 392 variable double-deck coaches for operation on long-distance and regional routes.

The new trains will be operated on the regional network in Bavaria, Germany, from December 2016 on the Augsburg – Treuchtlingen – Nuremberg and Treuchtlingen – Ingolstadt – Munich routes.

Deutsche Bahn chairman Rüdiger Grube said: "Our consistent investments in new rail vehicles clearly show that we are strengthening our company for the future requirements of the transport markets."

The order includes three four-car and 15 six-car double-deck multiple units capable of operating at a maximum speed of 160kmph, with each set consisting of two power cars with two or four intermediate coaches.

"The order is part of a framework agreement signed in 2008, under which DB has already ordered 392 variable double-deck coaches for operation on long-distance and regional routes."

"This is how our trains create value for our customer Deutsche Bahn and contribute significantly to effective regional transportation," Bertling said.

The new trains will feature low-floor entrances and multi-purpose areas with space to accommodate bicycles and luggage, and an intermediate coach with a dedicated area for passengers with reduced mobility.

Bombardier will produce the double-deck trains at its Görlitz manufacturing facility in Germany, while its Hennigsdorf plant will be responsible for research and development, bogies will be produced in Siegen and drive engines will be built in Västerås, Sweden.

Each car in the Twindexx Vario trainset will have four drive motors and the Bombardier Mitrac 1000 drive and control system.

In April 2013, Bombardier won a €113m order from DB for 12 four-car Twindexx Vario trains to be operated by DB Regio on Main-Spessart Regional Express services from Frankfurt to Würzburg, Aschaffenburg and Bamberg.

Image: Bombardier’s Twindexx Vario trains will be run on the regional network in Bavaria, Germany from December 2016. Credit: Bombardier.