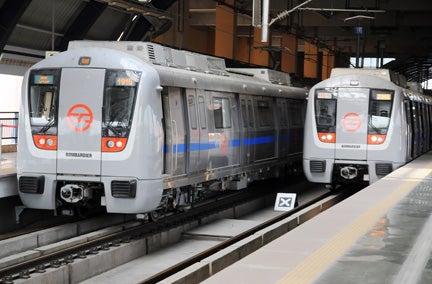 The extensions of lines 5 and 6 are part of the third phase of Delhi’s metro expansion plan to further improve passenger transportation in the city.

The new deal will increase the reach of the two metro lines, which have been equipped with Bombardier’s Cityflo 350 technology since they opened in 2010.

Under the new deal, Bombardier will be responsible for the design, supply and commissioning of the integrated signalling and train control technology, including trackside and onboard equipment.

"The extensions of lines 5 and 6 are part of the third phase of Delhi’s metro expansion plan to further improve passenger transportation in the city."

The extension of the lines will add 35km of double track line and 23 stations to the Delhi Metro, with scheduled completion in 2016.

Bombardier’s Cityflo 350 system will be equipped on the 9.4km northern extension of Line 6 from Central Secretariat to Kashmere Gate and the 14km southern extension from Badarpur to YMCA Chowk in the city of Faridabad.

The technology will also be installed on the 11km western extension of Line 5 from Mundka to Bahadurgarh City Park.

Image: Bombardier’s Cityflo 350 will be installed on the Line 6 extension from Central Secretariat to Kashmere Gate and from Badarpur to YMCA Chowk, as well as on the extension of Line 5, which will run from Mundka to City Park. Photo: courtesy of Bombardier.