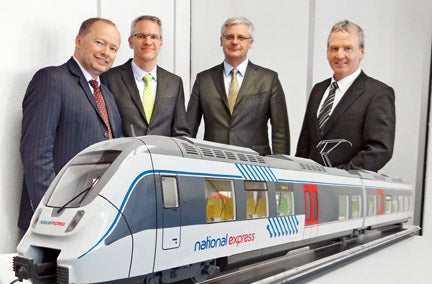 Under the deal, Bombardier will supply three and five-car trains, which will be capable of operating up to 160km/h.

The trains will feature first and second-class seating and will be equipped with CCTV, multi-purpose areas for prams, wheelchairs and bicycles, and passenger information monitors showing connecting trains.

Following delivery in 2015, the new trains will be run on the RE 7 Rhein-Münsterland-Express and RB 48 Rhein-Wupper-Bahn lines, which will be operated by a consortium between National Express and local partner IntEgro Verkehr.

The consortium won the licence in a Europe-wide tender to operate services on the lines under a 15-year contract awarded in February by the Rhein-Ruhr, Westfalen-Lippe and Rheinland transport authorities.

"Bombardier will supply three and five-car trains, which will be capable of operating up to 160km/h."

"Now we are focusing on the timely start of operation of both lines between Bonn, Cologne, Wuppertal, Hagen Hamm, Münster and Rheine in December 2015," Richter said.

The trains will be fitted with an automatic coupling at every front end, mainly in multiple traction.

Image: National Express- IntEgro Verkehr consortium will run the new trains on the RE 7 Rhein-Münsterland-Express and RB 48 Rhein-Wupper-Bahn lines from 2015. Photo: courtesy of Bombardier.