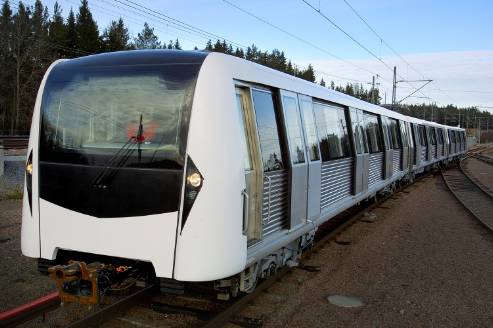 In addition to the new-generation C30 metro fleet of 96 trains, the contract also includes an option for an additional 80 Movia metro vehicles.

Bombardier will build the articulated Movia C30 trainsets at its Hennigsdorf plant in Germany and will start delivery from November 2016, with the trains scheduled to commence operations on the Stockholm metro’s Red Line in early 2017.

The Red Line will connect Stockholm’s north-eastern and south-western suburbs directly to the city centre.

Each four-car air-conditioned Movia C30 metro train will be equipped with a driver’s cab at each end and advanced driverless functionality, as well as features to provide improved access for passengers with restricted mobility.

"In addition to the new-generation C30 metro fleet of 96 trains, the contract also includes an option for an additional 80 Movia metro vehicles."

According to Bombardier, the new Movia C30 metros will also feature advanced passenger information systems and fulfil the highest environmental standards in terms of energy consumption and recyclable materials used.

The vehicles will be equipped with Bombardier Flexx Eco bogies and the Mitrac propulsion system, which will help offer maximum passenger capacity with minimal energy consumption and low noise.

Stockholm metro’s new Movia trains will cover about 150,000km per year and will offer the system capacity to transport around 60,000 passengers per hour.

The proceeds will be used to finance SL’s €80m contract awarded to Ansaldo STS in 2010 and for the re-signalling of Stockholm Underground with communications-based train control (CBTC), which is scheduled to be completed by 2014.

The loan is also supporting the construction of a new underground depot at Norsborg, modernisation of existing train maintenance facilities at Nyboda and the procurement of a fleet of C30 articulated trains.

Image: Following delivery, the Bombardier Movia C30 trains will be operated on the Stockholm metro’s Red Line from early 2017. Photo: courtesy of Bombardier.