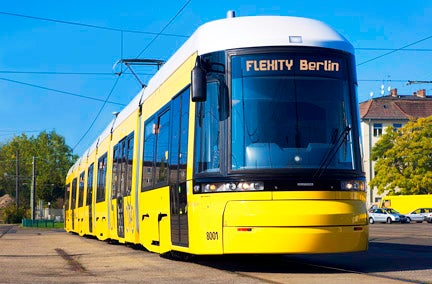 Bombardier Transportation has won a €134m order from the Berlin Transport Authority (BVG) in Germany to deliver an additional 39 Flexity trams.

The latest order is part of a framework agreement for 206 Flexity trams signed in 2006 and takes the total number of models currently in Berlin to 142.

Delivery of the additional trams is scheduled to start in 2016 with the full order of vehicles set to have arrived by 2017.

In 2009, BVG ordered four pre-series vehicles for testing, followed by a €300m contract for 99 Flexity trams.

"BVG and Bombardier have jointly developed the concept of the Flexity Berlin tram to operate in the city."

BVG executive director for trams Klaus-Dietrich Matschke said that with this order of 138 vehicles, the company is responding to a positive increase in passenger numbers and growing its capacity for the future.

"Furthermore, bi-directional vehicles provide the strategic option of removing track loops for turning, which would mean an improvement to the look and feel of tram stops," Matschke said.

"This order ensures that the old Tatra trams will be made redundant by the year 2017."

BVG and Bombardier have jointly developed the concept of the Flexity Berlin tram to operate in the city.

Bombardier Transportation president of light rail vehicles Germar Wacker said: "The trams, featuring a Bauhaus design, were specifically created for the German capital and have already received the IF Design Award and the Universal Design and Consumer Favourite award."

The company said that the interior of the trams provides ample space for passengers with multi-purpose areas and air conditioning both in the passenger area and in the driver's cabin.

Meanwhile, Bombardier is planning to unveil its new tram vehicle, the Flexity 2, at InnoTrans 2012 this September in Berlin.