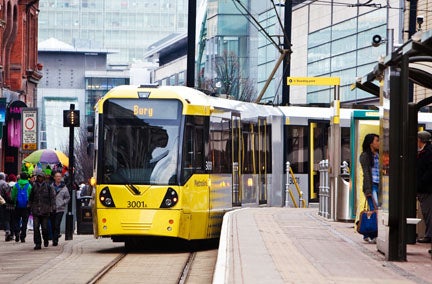 The option comes as part of the £33m contract signed with Greater Manchester Passenger Transport Executive (GMPTE) in 2007; Bombardier’s share in the contract is worth £25m.

Metrolink’s Flexity Swift LRVs have a length of 28.4m and width of 2.65m, and can accommodate more than 200 passengers. The models also feature wide double-door entrances to aid rapid passenger flow and multi-purpose areas that offer space for pushchairs and wheelchair users.

Bombardier secured its first order from TfGM for eight LRVs in April 2007 and since then it has delivered 54 vehicles and won optional orders for 66 additional LRVs in batches.

Bombardier’s Flexity Swift vehicles have now been in service in Manchester for more than two years, with the latest order for 20 additional vehicles, bringing the total number of the energy efficient LRVs ordered by TfGM to 94.

" Each tram will cost £2m and funding will be sourced from borrowing and cost savings; the TfGM Committee will oversee the investment on behalf of GMCA."

Design and production of the LRVs will be done at Bombardier’s facilities in Bautzen, Germany and Vienna, Austria, while Bombardier’s Siegen plant in Germany will be responsible for the delivery of bogies and Vossloh Kiepe will provide the electrical equipment.

Earlier this month, Manchester Metrolink received approval from the Greater Manchester Combined Authority (GMCA) to replace its old trams, which were introduced during the first phase of the network in 1992.

The trams, which are scheduled to be delivered by 2014, will replace Metrolink’s entire fleet of T68 trams.

Each tram will cost £2m and funding will be sourced from borrowing and cost savings; the TfGM Committee will oversee the investment on behalf of GMCA.