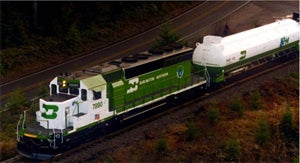 BNSF Railway has been working with locomotive manufacturers GE Transportation and EMD, a unit of Caterpillar, to develop the LNG engine technology that will be used in the pilot project.

The use of LNG as transportation fuel is being explored as a means of reducing greenhouse gas emissions and particulates when compared to diesel.

BNSF chairman and CEO Matthew Rose said that the use of LNG as an alternative fuel is a potential transformational change for the company.

"While there are daunting technical and regulatory challenges still to be faced, this pilot project is an important first step that will allow BNSF to evaluate the technical and economic viability of the use of liquefied natural gas in through-freight service, potentially reducing fuel costs and greenhouse gas emissions, thereby providing environmental and energy security benefits to our nation," Rose said.

"BNSF Railway has been working with locomotive manufacturers GE Transportation and EMD, a unit of Caterpillar, to develop the LNG engine technology that will be used in the pilot project."

The pilot will see BNSF test six modified locomotives, three each from Caterpillar and GE.

BNSF said if the pilot project is successful, it would offer huge saving in terms of fuel as its locomotives consume around 4.9 billion litres of diesel per year.

BNSF’s predecessor Burlington Northern used LNG as a fuel for locomotives on a small stretch of contained track in the 1980s and 1990s.

"The changed market for natural gas in the United States is a critical part of our decision to explore it as a locomotive fuel and in this pilot we will test natural gas engine technology in railroad service," Rose said.

"We will be working with the equipment manufacturers, the various regulatory agencies and government officials to address the necessary actions to accomplish this."

BNSF plans to make a decision in 2014 on whether it will start to switch its fleet of over 6,900 locomotives to LNG.

Image: BNSF’s predecessor Burlington Northern used natural gas as fuel for a small number of locomotives in the 1980s and 1990s. Photo: courtesy of BNSF.